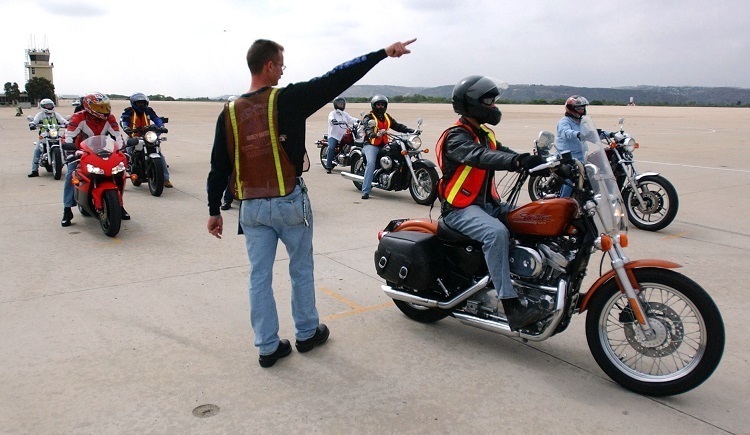 With the weather starting to warm, and the rain, hopefully starting to abate, many motorcyclists in the UK are beginning to look forward to days and weekends spent touring on their bikes.

It is estimated there are some one-million motorcycles in daily use on Britain’s roads. Out of 5-million full license holders in the UK, that’s just 20%, meaning 80% no longer own or use a bike, or are occasional users. Extensive experience is now required before being able to ride the larger machines, and there are many high quality biker training courses available for the serious rider.

None-the-less, there are still far too many accidents involving bikers, many of them not the bikers fault. The overall figures for accidents and bikers killed on the UK’s roads make for some sobering reading. With many of the UK’s motoring institutions and police forces beginning their summer campaigns for biker awareness, what is needed, to stay safe when out and about on your motorcycle?

While crash helmets are the only piece of protective clothing required by law, whether travelling two miles, or 200 miles full protective kit should be worn. Motorcycle leathers if you have them, or good thick trousers, jacket, boots or shoes, and gloves. The damage done to bare skin sliding along the tarmac, or worse, gravel roads, can be extensive and scar for life. Remember, in the event of even a small accident, your biking clothes are the only thing between you and far more serious injuries.

The biggest concern for both cyclists and motorcyclists is being seen. Even the larger bikes are less than the quarter the width of a car. A driver’s quick glance in his rear-view mirror can often miss a motorcycle. During day light hours wear a bright day-glow vest or tabard, and during darkness reflective clothing. Everything you can do to make yourself and bike more noticeable should be done. Help avoid making yourself just another statistic.

Many of today’s bikers are what are termed occasional bikers. Usually older riders, through the winter months the bike has been lovingly polished in the garage. The rider becomes a car driver, going back and fore to work on four wheels. Summer arrives and the bike comes out. But remember, it takes a few hours in the saddle to fully regain all that biker awareness.

One of the most crucial points of staying safe on a motorcycle is being aware. Not just of the road you’re on, or the vehicle in front of you, but of everything going on around you.

Position yourself closer to the crown of the road when approaching junctions on your left, so you can be more easily seen. The car waiting at the junction, has he seen you, or is he likely to pull out? Ride far enough behind the vehicle in front, and position yourself so he can see you in his mirrors, and you can see what’s going on in front of him.

Remember, most cars have a blind spot between the interior rear-view mirror, and the wing mirrors. Get your partner to watch you in all mirrors on the driveway, and move the bike until you hit the blind-spot. Although blind-spots can vary, it gives you an idea of where not to be, when following a car on the open road.

Many of the accidents between motorcyclists and car or truck drivers, can be attributed directly to carelessness on the part of the driver. Make sure you are not one of them.

Whenever you’re on the road, as much time should be spend checking your rear-view mirrors, both interior and exterior, as is spend peering through the windscreen. If you see a motorcycle approaching some distance behind, keep an eye on him. Be sure you know where he positions his bike behind you. If he’s weaving left and right behind you keep close to the left. It stops him coming up on your inside, which he shouldn’t do anyway, and gives him a chance to pass. Let someone else worry about him.

Indicators are there for just that, indicating which direction you are about to move in. Use them all the time, giving any traffic, but especially motorcycles, plenty of warning of your intentions.

Be fully aware of the possibility of a motorcycle being behind you. Whether you’re turning at a junction, or changing lanes on a dual carriageway or motorway, indicate in plenty of time and check, check, and check again all mirrors. A cursory quick glance and you may have missed him sitting in a mirror blind spot.

Likewise when joining a main road from a side junction. A quick glance left and right isn’t good enough. You need to make absolutely sure there are no bikes approaching, especially if the road handles fast moving traffic. Over half of all motorcycle accidents occur at road junctions, and most involve a four wheeled vehicle.

Food for thought for both motor car drivers, and motorcycle riders – motorcycles account for just one percent of traffic on the UK’s roads, but 20% of serious or fatal accidents. Many of those accidents involving motorcycles, also involve a car or truck.

This summer, when out and about on your bike, don’t allow yourself to become a statistic. Remember your defensive riding, and enjoy the open road in safety.

Find the Best Used Cars on the Market

Reasons Why You Should Rent a Van

Some Of The Tips For Finding A Good Motorcycle Mechanic

The Advantages Of Regular Car Servicing